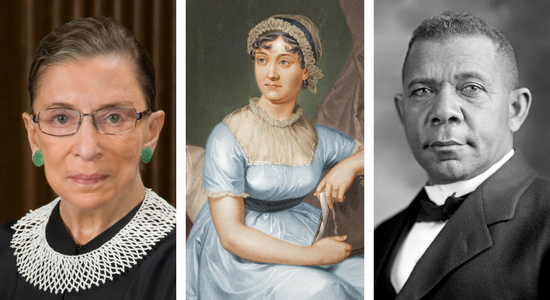 I started out with a goal to read 12 books this year. When I started finishing a lot of books (thank you to my DC commutes for that), I raised it to 36. And I did it!

Here they are, grouped into categories based on how I felt when I read them. My especial favorites are marked with an asterisk.

All the feminist feels:
Cinderella Ate My Daughter: Dispatches from the Frontlines of the New Girlie-Girl Culture by Peggy Orenstein
We Should All Be Feminists by Chimamanda Ngozi Adichie
*Notorious RBG: The Life and Times of Ruth Bader Ginsburg by Irin Carmon & Shana Knizhnik

All I want to do is read about race in America:
Tears We Cannot Stop: A Sermon to White America by Michael Eric Dyson
*Up from Slavery by Booker T. Washington
Between the World and Me by Ta-Nehisi Coates

Underwhelmed:
White Trash: The 400-Year Untold History of Class in America by Nancy Isenberg
A Square Meal: A Culinary History of the Great Depression by Jane Ziegelman

Why is this the worst?:
Bossypants by Tina Fey

And its companion, Who let this be published?:
The Kingdom of Speech by Tom Wolfe

Classics so good, I can't believe I waited so long to read them:
Of Mice and Men by John Steinbeck
Pride and Prejudice by Jane Austen
*Emma by Jane Austen

Good because it's a classic, but I'm also not that into it:
The Great Gatsby by F. Scott Fitzgerald

Lol, why am I reading this?:
Living with a Wild God: A Nonbeliever's Search for the Truth about Everything by Barbara Ehrenreich
That Quail, Robert by Margaret A. Stanger
It's a Long Story: My Life by Willie Nelson with David Ritz

Book topics that are automatic heart eyes:
Garbology: Our Dirty Love Affair with Trash by Edward Humes
Everybody Lies: Big Data, New Data, and What the Internet Can Tell Us about Who We Really Are by Seth Stephens-Davidowitz
Give Us the Ballot: The Modern Struggle for Voting Rights in America by Ari Berman

I loved this as a teenager and I love it now:
The Year of Secret Assignments by Jaclyn Moriarty

Gotta pause every 5 minutes to think:
But What If We're Wrong? Thinking About the Present As If It Were the Past by Chuck Klosterman
Blink: The Power of Thinking Without Thinking by Malcolm Gladwell
*Antifragile: Things That Gain from Disorder by Nassim Nicholas Taleb
Posted by Rachel at 9:58 PM No comments:

I just listened to Between the World and Me by Ta-Nehisi Coates. He talked a lot about his years at Howard University, or, as he called it, "the Mecca."

He talked about living in D.C. About hanging out in U Street, about the police brutality in neighboring PG County.

His descriptions of D.C. hit me so hard that tears filled my eyes in my car as I was driving. I only lived there for four months, but I miss it. I ache for it. I have missed every place I've ever lived when I left it, but I've never cried about it before.

In the last few years I realized that I am a city girl. As a child, I was endlessly anxious about one way streets and somehow getting lost and turning down a side street that suddenly became a dangerous part of town.

Now, though, cities fill me. I'm afraid to speak to people I don't know, but D.C. let me be near people. I didn't have to say anything, but I could watch them, overhear their conversations, sometimes feel my body pressed up against theirs on a crowded metro ride, interact with them through the courtesy of public life--of passing on the left on the escalator or holding the door open for someone behind you.

In D.C. there were people with skin of every hue. During the week, the metro was filled with white people surging in from the suburbs to go to work, but on the weekends, the cars were emptier and ridden by people with brown skin going to and from their weekend errands.

I saw people wearing multiple types of religious clothing and headwear that I wanted to know more about.

I saw things that puzzled me. There were never any middle aged women on the metro in the morning. When I got to work, the building was filled with them. How did they get there?

I saw things that awed me. More fathers than I could count taking their children to day care in the morning. The fathers. Alone, no mother in sight, taking part in the quotidian intimacy of morning and evening commutes with their children.

These people were more often than not dressed more formally than I saw anyone dress for work in Utah. No casual Fridays, just day after day of morning coffee and walking several blocks in high heels, to huge old buildings to do government. To talk and argue and submit the same data to multiple subgroups in Congress, having to reformat their reports for each one. Landscape! Portrait! Only to get home so late that they barely have time to eat and work out and watch one episode of a tv show before they have to go to bed so they can do it all again tomorrow.

When they lay down to bed, the constant sirens whizzing past them sang them a lullaby to sleep.

These people did government on a daily basis. Sometimes just steps away from museums filled with the best art and history that our country has had the pleasure of having. People came on vacation to see these things. They came on vacation to a city that was mine, and I always forgot that until I was walking in the surprisingly warm winter air on a Friday afternoon and I saw groups of them, not fully sure they were walking in the right direction, but taking in the awe of it all.

As a child, I went on field trips to D.C. and I was one of those people. I regret that on my eighth grade field trip, I was more interested in the cute boys from a different school in line in front of us than I was about seeing Ford's Theater.

Now, though, I relished any time I could steal away to the Lincoln Memorial. It's not really close to any metro stops, so it takes a while to get there. And once you're there, you have to give it the time it is due. To go in, find a way to ignore the crowds, and say hi to your best friend. To talk quietly to him in your mind. To enjoy that sacred feeling of being inside of a type of temple.

Then, you go out and sit on the steps, and stare out at the city. The reflecting pool, the Washington Monument, the Capitol. You feel the confidence of Lincoln behind you and the beauty and the fragility of the American dream in front of you.

I think Washington, D.C. and I are made of the same things. 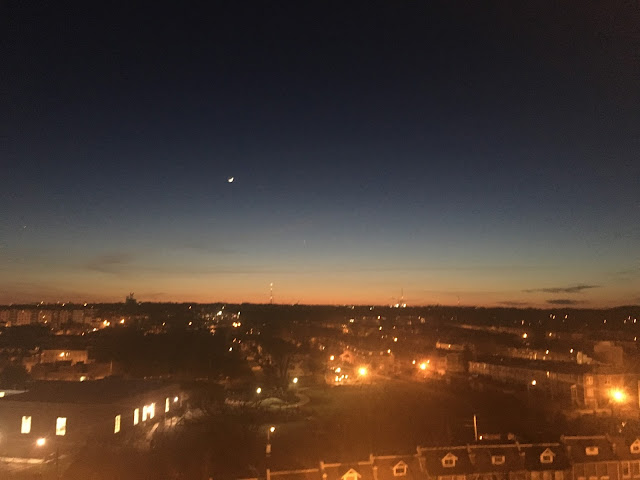 The view of the city from the top of my apartment
Posted by Rachel at 8:52 PM 2 comments: