On Friday, I had two weighty realizations within a few minutes of each other.

I am now someone who regularly spends Friday nights in the library.

Kids who are now freshmen in college were only finishing seventh grade when I graduated from high school.

These thoughts crossed my mind as I was walking from my car to the library for another evening. (Now that I'm in grad school, at least, I always drive to the library. I never walk.)

When I left the library a few hours later, I ended up walking out behind middle-aged parents and their young adult son. From what I gathered from listening to their conversation, they had gone to one of those old movies that they play in the basement on some Friday nights.

They were talking loud, saying,
"How do you think they got that shot? With all the horses?"
and
"Yeah, can you believe that they could do that? Back in the '30s!"

A fact about me is that I get impatient when I walk behind people. So I sped up and zagged through them, dodging another family that was walking just ahead.

As I accelerated past, their voices rose into a clamor of laughter and exclamation and questioning and wonderment. They were all talking at once, steeped in their shared experience and the thrill it brought them.

I had passed them by then, and I kept walking quickly. But I looked up and grinned at the night sky--a grin for no one to see, just one that came out of me like a hiccup.

I was having the third weighty realization of the night. 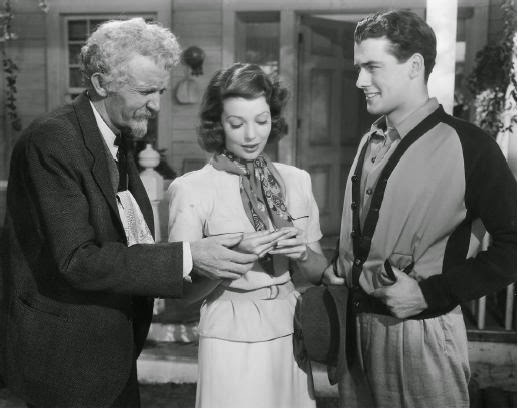 A still from "Kentucky," the film that evening
Posted by Rachel at 11:00 PM